Sign Up to our social questions and Answers Engine to ask questions, answer people's questions, and connect with other people.

Lost your password? Please enter your email address. You will receive a link and will create a new password via email.

You must login to ask question.

What is mycorrhiza: A mycorrhiza is a symbiotic association between a green plant and a fungus. The plant makes organic molecules such as sugars by photosynthesis and supplies them to the fungus, and the fungus supplies to the plant water and mineral nutrients, such as phosphorus, taken from the soil. Mycorrhizas are located in the roots of vascular plants.

Types of Mycorrhiza: Mycorrhiza are mainly divided into

Nutrient exchange: The major role of mycorrhiza is in exchange of nutrients with the crops. Glomeromycotan fungi are obligate symbionts and rely on the carbon provided by their plant hosts to complete their life cycle In return, the fungus provides nutritional benefits to the plant by delivering minerals, including the biologically essential nutrients phosphorus (P) and nitrogen (N). The majority of this nutrient exchange is believed to occur within root cortical cells containing highly-branched hyphal structures termed arbuscules.

Phosphate uptake: Phosphate acquisition via the mycorrhizal pathway begins with the uptake of free phosphate from soil by fungal extra-radical hyphae. These fungal hyphae extend beyond the host root system, allowing a greater soil volume to be exploited for phosphate uptake. Uptake at the soil hypha interface is mediated by fungal high-affinity phosphate transporters of the Pht1 family. Following fungal uptake, phosphate is transferred to the fungal vacuole where it is polymerized to form polyphosphate chains and translocated through the vacuole to the intraradical hyphae. The polyphosphate is then hydrolysed and phosphate released to the interfacial apoplast. From the interfacial apoplast, plant mycorrhizal Pht1 transporters guide the phosphate across the peri arbuscular membrane. Once in the plant cytosol, phosphate is translocated into the vasculature for delivery to all parts of the plant.

Nitrogen uptake: The extraradical mycelium of mycorrhizal fungi also absorb ammonium, nitrate and amino acids, and the role of mycorrhizal nitrogen delivery is becoming better understood. The majority of nitrogen is thought to be taken up in the form of ammonia via the action of fungal-encoded AMT1 family transporters such as the protein GintAMT1 characterized from Glomus intra radices. The transfer of nitrogen most probably occurs in form of amino acid arginine. Having been translocated to the intra-radical hyphae, amino acids may be delivered directly to the interfacial apoplast for plant absorption. However, there is also evidence for an alternative route whereby arginine is broken down by ornithine aminotransferase and urease to release free ammonium.

How does mycorrhiza enhance nutrient uptake in crops?

Mycorrhizal crops (crops with natural or applied mycorrhiza), can take up nutrients from the soil via two pathways:

The ‘plant pathway’- involves the direct uptake of nutrients from the soil by the root epidermis and its root hairs.

The ‘mycorrhizal pathway’- that involves the uptake of nutrients via the ERM of the fungus and the transport to the Hartig net in ECM interactions or to the IRM in AM interactions, and the uptake by the plant from the interfacial apoplast. 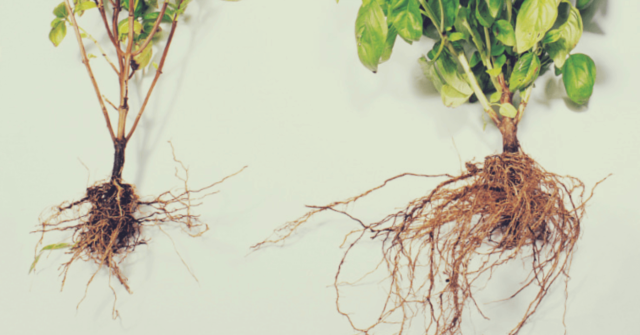 What is the role of mycorrhiza in crop disease control?

Mycorrhiza and their associated interactions with plants reduce the damage caused by plant pathogens (Harrier and Watson, 2004). With the increasing cost of pesticides and the environmental and public health hazards associated with pesticides and pathogens resistant to chemical pesticides, mycorrhiza may provide a more suitable and environmentally acceptable alternative for sustainable agriculture.

An infestation in the roots of crops by plant parasitic nematodes or by soil fungi, may not be noticed (under soil), until the damage symptoms appear on the aerial part. Root colonization by mycorrhiza reduces the severity of diseases caused by plant pathogens. The reduced damage is a cumulative result of the following mechanisms working together or separately.

How does mycorrhizae help to control abiotic stress?

How do mycorrhizae improve growth and grain production in crops? : Mycorrhiza benefit growth of many crops due to

Is the soil mycorrhiza population decreasing?